Create an Account - Increase your productivity, customize your experience, and engage in information you care about.

Clinton Township’s history begins with David Zeisberger, a Moravian missionary, who practiced in the Ohio Country throughout the American Revolution and during the new nation’s early years. 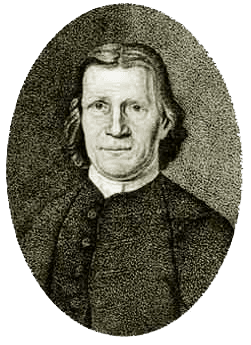 Zeisberger was born in Moravia (the Czech Republic) in 1721 and immigrated to British North America in the late 1730s. He joined the Moravian Church, eventually settling near Bethlehem, Pennsylvania, and became a missionary to various Native American groups in Pennsylvania and New York. Zeisberger’s missionary work emphasized how Christianity could be beneficial to the natives. However, this often led to the end of the traditional ways of life of the American Indian converts.

During the 1760s, Zeisberger lived with the Lenape (Delaware) in Pennsylvania. However, as the colonial population grew in British North America, more land was needed, and the Lenape were forced westward, reaching Ohio in 1772. Upon their arrival, Zeisberger established the village of Schoenbrunn, located near modern-day New Philadelphia. The missionary intended this village to be a refuge for so-called “Christian Delaware” and a location where further outreach efforts could be made. At Schoenbrunn, the Delaware lived like the Anglo settlers in the region – planting crops, serving as skilled craftspeople, attending school, and participating in religious services. The Moravians required the Delaware to abandon much of their traditional heritage. They could no longer engage in war or the ceremonies associated with it, such as painting their faces. The Moravian missionaries urged them to follow European social customs, including monogamous marriage, and take new Christian names. Schoenbrunn and its cultural assimilation scheme was such a success that the Moravians built towns at Lichtenau and Gnadenhutten.

Zeisberger found many converts among the Delaware in eastern Ohio, but some rejected the forced changes in their lifestyles. As the American Revolution began, the Moravians and their Christian converts found themselves in a difficult position. Neither the American colonists nor the British and their Indian allies felt they could trust them. In 1781, the British commandant at Fort Detroit, Major Arent DePeyster, feared Zeisberger’s influence among the Ohio Delaware, so he arrested him for being sympathetic to the American cause. Charged with treason, Zeisberger convinced British authorities of his neutrality and was released.

Throughout the revolution, Zeisberger’s followers also faced opposition from other Delaware, who had retained their traditional belief system. Fearful for their lives, the Christian Indians abandoned Schoenbrunn in 1776. Zeisberger then concentrated his efforts on Gnadenhutten, but after its destruction in 1782 due to a brutal militia attack that killed upwards of 96 Delaware, the missionary moved his attention to new villages in northern Ohio and Michigan.

The first recorded settlement on the land currently known as Clinton Township was called New Gnadenhuetten and established on July 22, 1782, by David Zeisberger and his followers. Zeisberger described the site of “New Gnadenhutten” in his diary:

“Founded on this side of the river a fine place to lay out a town on a height – between the river and the height, there are many springs with many separate little brooks that flow into the river and have exceedingly good water. The land on the site of the town is so sandy – the lowlands are very rich with heavy timber. We chose this place before all others for our townsite –  heavily laden boats can go even to the fork, a half-mile higher up – and canoes can go much further. We are glad and thankful to have found such a good and healthy spot for a townsite; nothing was lacking. We found traces that long ago an Indian town must have stood on this place.” 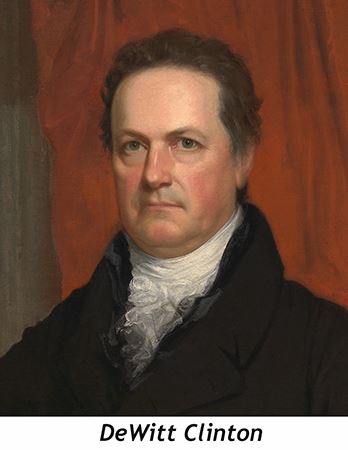 In July 1782, Major Arent DePeyster provided the Moravian Missionaries with provisions to obtain a parcel of land on the Huron River from the Chippewa Indians for their use until the war between England and the colonies was over. The Indians and French had called this river the “Nottawasippe.” The English called it the Huron of St. Clair. Today, it’s known as the Clinton River in honor of the former Governor of New York, DeWitt Clinton.

“In the evening, we came to the place appointed for use to settle in and encamped but were welcomed by mosquitoes and so badly treated that we had little rest, although we made a fire round about us so that the air was filled with smoke and steam. Thus far, we have found no place satisfactory to use, for all the land we have seen is too low, swampy, and exposed to overflow, though we landed several times and examined several places. Besides, we did not dare to settle within a distance of eight miles from the lake, for the land on both sides of the river belongs to some Detroit merchants. We examined further up the creek and found on the south side of the river a fine place to lay out a town on a height, not inferior to that at Schonbrunn (Ohio), and it has the same slope, according to the compass, and the course of the river, which Schonbrunn had.”

“We found many traces that a long time ago an Indian town must have stood on this place, for we saw many holes in the ground, which were now indeed filled up, but quite recognizable, in which Indians have even now the custom of keeping their corn and other property.”

New Gnadenhutten had been admired by surprised visitors, mainly from Detroit. Zeisberger mentions the arrival of Brother Conner on March 25, 1783, “to build himself (and his family) a house.” Conner was the only white man ever allowed to live with the Moravians and seems to have taken up residence simultaneously with William Tucker. Zeisberger describes Tucker on May 2, 1783, as “a white man, our neighbor, who settled several weeks ago on this river below us.” A map made by Zeisberger around this time shows 29 cabins and a large meeting house or chapel at the Moravian Settlement.

There was little food for the Moravians or Chippewas, who resented sharing their hunting grounds, especially with Christianized Indians. The settlement at Detroit was also in severe want during the spring and summer of 1784, and the people had to live mainly on weeds, which they cooked. In addition, the problems with the wolves increased, and many cattle were lost. The only animals taken in hunting were raccoons. This famine, preceded by three years of hunger, did not end until the bountiful harvest of September 1784.

On March 4, 1786, three years after the end of the Revolutionary War, when the English should have vacated Detroit, Major Ancrum, the new English commander at Detroit, and John Askins, a loyal English merchant, bought the Moravian settlement. Zeisberger  writes, “each of whom had a grant from the king of 2,000 acres, [and] wished to have it taken up here for them.”

The Moravians left New Gnadenhutten on April 20, 1786. Zeisberger writes, “After we had early, for the last time, assembled in our chapel, we loaded our canoes, and all went away together in the afternoon. None of us remained behind, save Conner’s family, who himself knew not whither to go, nor what to do.”

Zeisberger never attained the level of success as he had at his original settlements, but he continued his work with American Indians until he died in 1808.

The Chippewas did not agitate for the removal of the Conner family. Indeed, the entire family had special knowledge of Indian customs and dialects. Born about 1718 in Maryland, Richard Conner was 68 years old when the Moravians departed. His wife, Margaret, had been captured by Indians at the age of four. Conner had bought her freedom and then made her his wife, undoubtedly considering her suitability to the life he led as a trader and interpreter among the Indians. According to tradition, the Conners were obliged to give their first-born child, James, to the Indians as part of the bargain. Several years later, they were able to redeem him. Another son, Henry, became highly respected and influential among the Indians. Daughter Susanna may have been the first child of English-speaking parents to be born in Macomb County. In 1807, she married Elisha Harrington, who had settled in the neighborhood one year before. Richard Conner lived at the Moravian site until he died on April 17, 1808.

During the War of 1812, the British offered the Indians $5 per American scalp. It was a vengeful act that resulted in the Moravian settlers seeking safety at the fort in Detroit. After, those who returned returning to the Moravian site found their buildings burnt.

Just before the war, Elisha Harrington and his wife built a large house near the Moravian site and stayed in Detroit for protection (Harrington House 1995). Then, around 1819, Chief Justice Christian Clemens appointed Elisha Harrington associate judge. Elisha and Susan lived in the house until they died in 1847 and 1848. Displays of the house are inside the Moravian Hall Museum at Clinton Township’s Historical Village.

The Moravian Settlement was once known as Casino, and by 1818 it became known as the Village of Frederick. Twenty families lived in the village on streets named Livingston, Shelby, and Harrington streets. There was a hotel, several mills, a blacksmith, and a cooper (barrel maker). By 1843 Frederick was a busier place than even High Banks, which later became Mount Clemens.

In 1827, the area known as Clinton Township was much larger than today and encompassed what later became Warren and Erin Townships. In 1837, the same year Michigan became a state, Clinton Township was named to coincide with the Clinton River, renamed in honor of DeWitt Clinton at the first meeting of the state legislature. 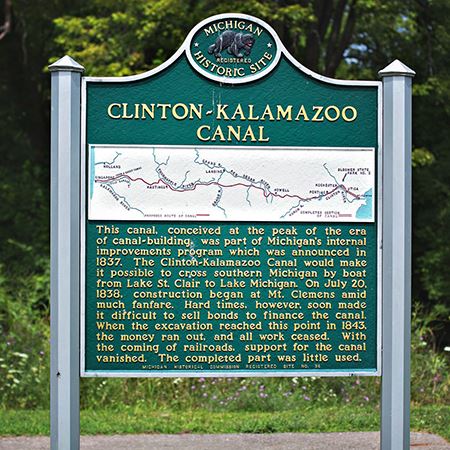 Transportation was difficult in southern Michigan due to the vast expanse of marshland, so developers needed a solution to ship goods and people. The idea of a canal across Michigan seemed to be a logical endeavor. On April 12, 1827, the Clinton River Navigation Company was formed. Using the successful Erie Canal in upstate New York as a template, the plan called for a canal to be dug from Frederick to Lake Michigan, utilizing the waters of the Clinton and Kalamazoo Rivers. Public Act #27 declared 500,000 acres of land was to be sold to provide funds to build locks on the Clinton River at the Village of Frederick. Work on the canal continued on and off until it ceased in 1850 due to a lack of funds and the nation’s increased dependence on rail transportation.

During the early development of Macomb County, lumbering interests saw much of the land cleared, and farming became the primary occupation of settlers. As a result, there were many sawmills and gristmills along the banks of the Clinton River. Also, small towns existed inside Township borders. Frederick, Marcellus(1838), Quinn (1816-1873), and Cady’s Corner (1864-1906) all had their day and are now part of Clinton Township’s history.

To find out more about the history of Clinton Township, visit the Macomb-Clinton Public Library.